How the Secretary Sees It

CAPTAINS MEETING
Money Draw: £100 County Hotel; £20 Rose & Crown;
£10 Fox C and Halfway House
13th May Doubles Comp @ The Phoenix
20th May Singles Comp @ The Phoenix
Both nights registration from 7:45 with an 8pm start
27th May Finals Night @ The Unionist Club 7:00pm start.  Order of play T.B.C.
For this year there will be no Presentation Night.

Friday Night  (May 6th) saw the last of the League connected Cups. After the previous week's display we looked forward to more of the same and we were NOT disappointed.  The SUPER LEAGUE SINGLES met and possibly exceeded expectations.  The Group A match between team mates (Café Enna)
Andy Goodfellow and Tristram (180) Douglas was a great match with in one of the legs Tristram hitting 2 consecutive 180's and finishing on 98 for a magnificent 12 darter.  The pair cruised through the next rounds to meet up in the Final.  Not to be outdone Andy had a magnificent evening hitting 3 x 180's and a top class finish of 160 the highest finish of the season (so far!)
ANDY GOODFELLOW then went on to take the SuperLeague Single's title by beating Tristram 3-1.  Thanks to everyone for a great night of darts.
The Lar Miller Cup was also decided and the Winners were the Phoenix Phantoms who beat Halfway House by 6 legs to 5

An exciting night of quality darts saw the top Division A players compete in the
CHAMPION OF CHAMPIONS cup competition which was eventually won by
Ian Cooper (Phoenix B) from Tristram Douglas (Café Enna) in a 7 leg thriller with Ian taking the final leg with a 146 Check Out.
Apart from the 146 check out there were three 180's hit one each for
P. Sinclair and I. Cooper and further 3 (THREE) for the league's Mr 180, Tristram Douglas giving him a staggering total so far and he's not finished yet!!
Also decided on Friday was the Bottom Four Cup final which was won by
The Miners Arms (3 legs) against Corstopitum Club (0 legs).

Notice to Change of Rule 18
After an unprecedented increase in the number of late transfer requests the Committee (under rule 19) have made changes to Rule 18 regarding Transfers.  This will be effective immediately.  The amended rule  will not apply to anyone who has played up to now under the old rule:

Rule 18 (updated 16/04/2022) CUP COMPETITIONS: Players wishing to play in ANY cup competition for a Team must already be registered with that Team.
Players having played in a Cup Competition will be Cup Tied in that competition.
NEW REGISTRATIONS OR TRANSFERS will NOT be allowed on the night of a cup competition.
TRANSFERS WILL NOT BE ALLOWED AFTER THE END OF THE LEAGUE SEASON.

CONGRATULATIONS to Café Enna who have won the 'A' Divison for the fourth time after a seasons long battle with the Rose & Crown ( the last full season's winners 2019-20) along with the Phoenix 'B'.
The 'B' Division runners up spot has now been decided and sees the Lion and Lamb promoted with as already stated the Grapes B.

Congratulations to the Grapes B on having won  Div B with a week remaining of the present season. 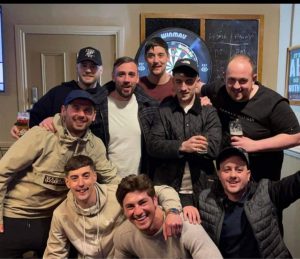 Café Enna's Tristram Douglas has hit 12, 180's taking him passed the record number of 180's hit in league and cup matches, with still several weeks remaining of the 21-22 season.  The record of TEN previously held by Fenwick Mews (Phoenix A) was achieved in the 2018-19 season.  Well done Tristram keep going!

When you send in your result card by e-mail, or a messaging service there is no need to make a special journey to drop the card into the Ex Service club.  However please retain the originals and hand them in at the next Captain's meeting.

RESULTS CARD
Results Cards can be downloaded from the About Us page (in PDF format) and printed.  Please use this option rather than pieces of paper.  Thanks.

Result Cards
To be in the Results Box in the Ex Service Club by 9pm on Monday following the Match but preferably e-mail a copy to:-